Is This How To Get Your Job Interview?

2021Is this how to get a job interview? French study reveals that women wearing low-cut top are 19 times more likely to get job interviews. And We Thought All It Took Was A Brilliant Resume!

Whoa! Whaaatt? Surely this can’t be true? All this time we thought all you needed was a cracking resume! Clearly not, at least in France, where the study took place.

It seems that CV Saviour might need to rethink the guidelines we give our clients for LinkedIn profile photos. One thing is for sure, we are not for minute going to suggest that you go put your photo on your resume (or a photo of yourself in a low-cut top either. For starters, images can cause all sorts of issues for ATS systems so you resume might not get read in the first place!) however, we will be watching the outcome of further research by the author (also responsible for the study “The Impact of Beauty during Job Applications” with interest.

The study has been widely reported in the lead up to the Appearance Matters Conference – the world’s largest event on body image and disfigurement. The conference will see more than 200 appearance experts from across the world tackle issues including weight loss surgery, eating disorders and ‘ultra-thin’ dolls. Dr Kertechian decided to research the impact clothing had on the recruitment process after realising it had never been studied.

Here’s the article from news.com.au

TO BE honest, we found this new research out of France a little surprising.

We thought the only reason you’d present yourself in a low-cut top when applying for a job would be if that job was at Hooters. But it seems that we’ve got that all wrong.

A new study carried out in Paris has shown that female applicants were more successful in securing job interviews when pictured wearing a low-cut top.

Sevag Kertechian, a researcher based at the Paris-Sorbonne University decided to research the impact clothing had on the recruitment process after discovering that it had never been properly studied.

Over the course of three years as job advertisements in the sales and accounting field arose, DR Kertechian put two fictional women forward for the roles.

In the face they look almost identical and in the application they had near identical skills and experience. 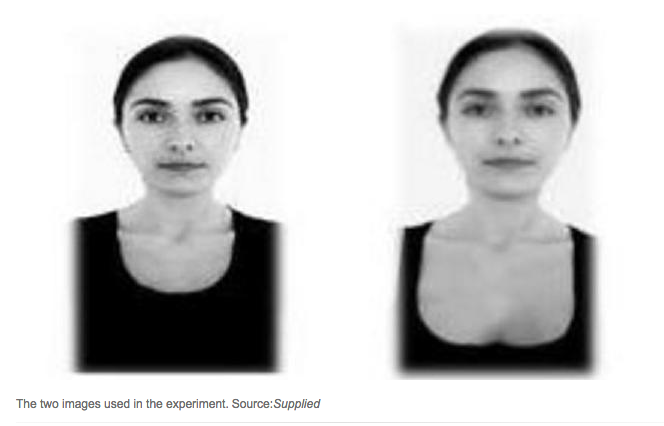 To ensure the experiment was fair each woman was forwarded for 100 roles wearing the revealing outfit and 100 jobs in the more traditional clothing (the photograph was attached to their application).

What he found was that the woman wearing the low-cut dress captured the attention of the recruiters more successfully. And the difference was substantial — the woman in the more revealing outfit was 19 times more likely to secure a face-to-face interview.

Of the 200 sales role applications, the low-cut dress submissions received 62 more interview offers than their counterparts.

From the 200 accountancy applications there were 68 more interview offers for the more provocatively-dressed woman.

There are a few things to consider here that limit the findings a little. Firstly, the experiment was conducted in France and maybe employees in different parts of the world have different … values.
It’s also important to note that the experiment only covered two sectors of the workforce: sales and accounting.

Finally, this is operating on the assumption that people attach a photo to their resume when they apply for a job. While this isn’t such a common practice in Australia, perhaps we should all be reconsidering our LinkedIn profile pic.

Dr Kertechian said: “Our results showed interesting trends as low-cut dresses significantly influenced the choice of the recruiters, even for accounting positions.

“Regardless of the job, whether customer-facing saleswoman or office-based accountant, the candidate with the low cut clothing received more positive answers.

“The results were quite shocking and negative but not necessarily surprising — they show we need to conduct more research.”