James Got The Job

“Awesome news! I got the job! I am smiling from ear to ear.”

From Unemployed To $80K In 2 Job Applications 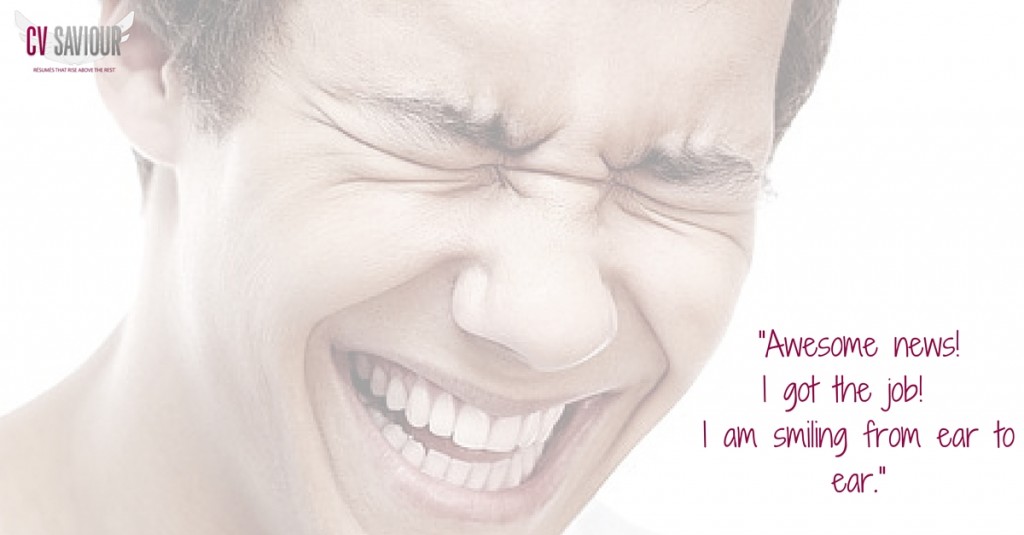 Now that’s the kind of news I just love to hear. I just heard from a client who I’ve been working with over the past few of weeks, and I have to tell you, this is what gets me out of bed each day.

James contacted CV Saviour three weeks ago, and he has now broken all our records for helping someone get the job of their dreams.

But before I tell you about that, I need to tell you a bit more about his back story, so you can understand what a momentous occasion this.

Five years ago, James was in his early 30’s. He had a diploma and a couple of certificates under his belt and spent his days in a field-based role that involved a lot of labour. Then he had an accident at work that left him with an injury and good reason to take a step back and reconsider what he was doing career-wise. 18 months ago, after three years’ full-time study, James completed a Bachelor’s degree and set about trying to find a job.

One of the first things he did was engage a resume writer. (A smart move).

Hundreds of job applications later, James was really worried – he hadn’t had one single request for an interview. Assuming there was a lack of jobs in his field in the Australian market, James went to overseas to see if he could find work. On arrival, figuring his Australian resume wouldn’t work for him locally, he engaged another resume writing company and started the process all over again.

Three months and 50 job applications later, and fast running out of cash, James returned to Australia to rethink his next move.

Lucky for James, a Google search led him to CV Saviour, and that’s where I came into the picture.

So what’s the record he broke?

Well, from the time he got his new resume, cover letter and LinkedIn profile written by CV Saviour, to when he got a job offer, it was 8 days – surpassing our previous record of 9 applications over 3 weeks with a job offer in week 3.

In those 8 days, James applied for 2 jobs with our help. The second application led to an informal phone interview 4 days after he submitted his application, and resulted in a face-to-face interview 3 days after that. The next day, James got the offer for his dream job – an entry-level position with a major global asset manager.

So what did we do differently?

Firstly, we’d walked in his shoes, so we had a deep understanding of where he was coming from, so we worked with James to get an understanding of what he wanted to do work-wise. James had already done the ground work and had worked out the best way to enter the market he wanted to, and he was pretty sure he could do the job, so we created the documents he needed to prove that he could. Then we researched exactly what the industry keywords were, and what those jobs required of applicants, as far as skills and experience were concerned. James didn’t have any experience in the field, so we identified his transferable skills, and articulated them in the context of the roles he wanted in the future, not the roles he had in the past.

The next thing we did was to create very specific, evidence-based, outcome-focused examples of James work, and we also used his university placements and project work to illustrate his potential.

We created a package of CV, cover letter and LinkedIn profile, and showed James how to tailor and his CV and personalise his Cover Letter for every job application. James’ LinkedIn profile told his story of how he came to his career change, in an authentic yet professional way, using a tone of voice that really showed the real James in a way a resume never could.

I guess it worked!

“Thank you for all your help getting me this position, your CV was fantastic. Responding so promptly and your words of encouragement really spurred me on when I was nearly about to give up, as I have been looking for work for over a year and a half now. Of all the CV writers I have contacted, you are the best by far without contest. You genuinely cared, and it was clear you understood my needs as a job seeker and gave me encouragement and support at every stage of the process when none of the other companies did. The instructions as to how to tailor my documents and LinkedIn profile really helped too. Your enthusiasm and passion for what you do shines through – a rare thing to find these days. Thank you so much again.”

Thanks, James – like I said – this is what gets me out of bed every day.

Congratulations again – we knew you could do it.