The Future of Jobs in Australia – 2020 and beyond

The study suggests that 630,000 jobs in Australia could be displaced by new technologies over the next decade. This figure is equal to 7.3% of the country’s existing workforce.

The model created by Cisco and Oxford Economics predicted that the construction sector will lose more than 70,000 jobs over the next 10 years. That is equivalent to about 8.4% of its current labour force. Additionally, 33,000 jobs are projected to be lost in the manufacturing industry which is equivalent to 5.5% of its workforce.

But it’s not all bad news. The prediction model also suggests that the healthcare industry will be expanding by 80,000 jobs in the next decade, making it the biggest job creator sector in Australia. The demand for nurses and childcare workers will increase by more than 12%. There will also be a growth in the demand for services tendered by personal care professionals and general medical practitioners.

Further increase in workforce is also forecasted in the tourism sector, adding 22,000 jobs in the coming years. The wholesale and retail industry is also predicted to add 20,000 workers.

The graph below shows the projected scenario of the effect of technology across industries. 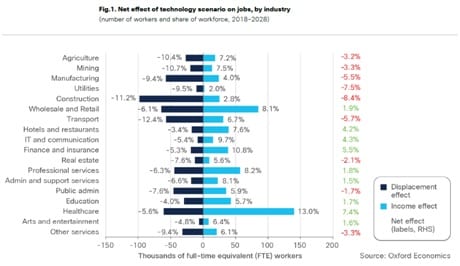 To summarise the data above, the following key industries will be greatly affected by technology in 2028:

The modelling framework created by Cisco and Oxford Economics calculated that 7% of the transport industry’s labour force will be displaced by 2028. Workers in the construction and agriculture and mining sectors, particularly the truck drivers, welders and flame cutters, are also predicted to displace more than 10% of its workforce. Moreover, the construction, manufacturing and transport industries together are predicted to displace 210,000 workers. That is one third of the overall job displacement scenario.

The vulnerability of these sectors to automation can be attributed to the nature of their work. Majority of the work that employees do in the said industries include operating vehicles, handling objects and controlling machines, all of which can be completed more efficiently using new technology like robotics.

On the other hand, hotels and restaurants and education are the industries that are least vulnerable to technological displacement. Although automated hotel check-ins and virtual learning environments could be implemented in these sectors, most workers, like bartenders and primary school teachers, will still need to perform primary tasks that include social interaction, team building and problem solving. These humanfacing activities are less vulnerable to automation according to the research. Despite the technological advancement, humans will still outperform such roles.

The healthcare sector is the biggest employer in Australia. Its growth is projected to continue together with the country’s ageing population. Nurses compose the largest occupation in this sector are among the least vulnerable to automation. Nurses spend most of their time on tasks involving making human connections which are almost impossible for robots to replicate and will continue to be the key aspect of the nature of their work. However, it is predicted that nurses will spend less time performing tasks like routine administration and communication and use more of their time doing critical thinking and interacting with computers.

The construction industry is the third largest employer in Australia. Compared to nurses, construction labourers are more vulnerable to automation and technology-driven displacement. Workers in this sector are mostly engaged in physical activities like operating machines or vehicles and gathering data. Cisco and Oxford Economics’ research model predicts that over the next decade, labourers will spend less time performing such tasks. Instead, critical thinking, repairs and maintenance of technological equipment will constitute most of their time.

As technology moves forward, the Australian job market will evolve along with it. The labour market will demand a more extensive set of skills transitions. The study suggests that more than 350,000 workers will be shifting into jobs that require an upgrade to their listening, speaking and critical thinking skills. An estimated of 150,000 workers will need to upgrade their negotiation, persuasion and learning skills in order to adapt to the labour requirement. More human skills are forecasted to be in high demand in 2028’s technologically advanced job market.

Cisco Australia and New Zealand’s Managing Director of Enterprise, Sam Gerner, said that there could be great rewards waiting for those who anticipated and prepared for the shifts in the labour market and that particular sets of skills would be in demand.

“The productivity gains for all industries, defined in the findings as the ‘income effect,’ illustrate a huge opportunity for Australia,” he said.

The ‘income effect’ that Mr Gerner is referring to is about the new demand for workers due to technology advancement. According to Cisco and Oxford Economics’ report, technology leads to growth in productivity, which results to lowering of prices and increase in income. The revenue is then spent on new goods and services which demands new workers.

“This prompts the need for Australian industry and technology leaders, policy makers and educational institutions to join forces and develop frameworks and programs that will address that critical need for developing new skills in the current workforce and training younger generations,” Mr Gerner said.

“A key insight from the report is the need for many roles that demand more developed soft skills, such as listening, speaking, critical thinking, negotiation and persuasion skills.”

“These are the skills that are going to be more valued as technology increasingly takes care of the automated tasks. We are entering a period in time that really can be described as ‘the human era’.”

Oxford Economics Director, James Lambert, said that from the industrial revolution through to the modern digital era, workers had established their value by their ability to use technology.

“Now, as technological capabilities expand deeper into the workplace, it is ‘human skills’ that increasingly define an employee’s value,” Mr Lambert said.

This technological evolution that will shape the Australian job market will take place gradually. As businesses integrate technology solutions like automation, artificial intelligence and Internet of Things, the processes of job displacement and job creation will occur continuously with it. New and pivotal work opportunities will emerge in some sectors while some roles will become redundant in others. Workers will constantly adapt to the changing demands of the labour market.

The roles of educators and employers are now more critical than ever in ensuring that a pipeline of skilled workers is in place to supply the requirements of the evolving workforce. Such preparation includes formal training for the newcomers to the job market and relevant sessions for employers together with existing staff to make adapting to the new technology solution easier. Additionally, businesses should provide on-the-job trainings for current employees to retain institutional knowledge and to accommodate upskill requirements of their respective industries.