The Employment Evolution in Australia

The total amount of work available per Australian has increased, not decreased. This is contrary to the fear of unemployment as technology is being implemented in production across businesses in Australia.

There has been a change in the composition of employment and production toward services rather than goods. The table below shows the evolution of jobs in agriculture, mining, manufacturing and services from 1900 – 2010. 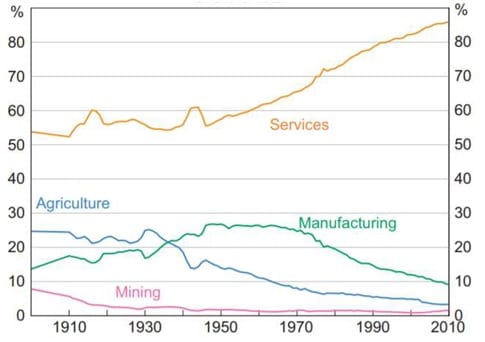 Employment in agriculture and mining began decreasing at the beginning of the 20th century, while manufacturing jobs increased until 1970. This prompted a demand for jobs in services. Since 1970, manufacturing jobs declined but employment in the services sectors continued to increase. The composition of services also shifted from distribution, transportation and communication toward public, business and professional services.

The increase in jobs in services are also fuelled by the increase in healthcare and community services employment from 1986 – 2019. This info is shown in Figure 7 below. Increases in other public services like education and public administration also added to the growth of services jobs. Statistics shown in figures 6 and 7 validates the claim that change in the structure of employment is not a vital factor in the job market in Australia.

Figure 7. Change in Employment by Industry (as proportion total employment), 1986–2019 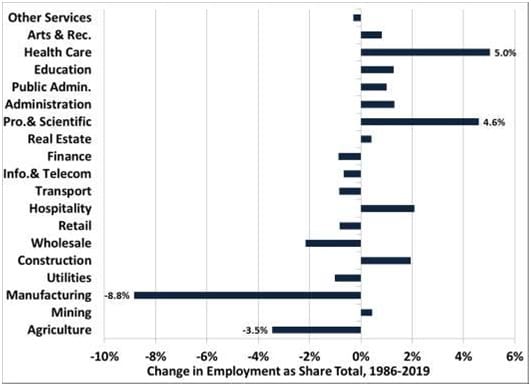 Another means that technology has increased the total amount of work available for Australians is by creating new work in sectors that did not previously exist. The boom of social media and its many platforms led to the creation of new roles in the digital technology industry. The demand of roles where technology made humans to take on more abstract thinking, cognitive and emotional labour, has required workers and jobseekers to acquire skills that will help them attend to more non-routine and cognitive tasks. These tasks will allow workers to engage in more complex work.

Contrary to some claims that new technology is disruption employment, the shift in the demand for cognitive skills has already been evident for decades. The noticeable increase in bachelor’s degree attainment among Australians from 1982 to 2018 is a measure of such trends. Demand for skills for high-human-in put work led to the growth in both professional and social services employment. The data in table below further shows that Australia shifted from hiring technicians and trades, machinery operators and drivers, labourers, and clerical and administrative workers.

Figure 8. Change in Employment by Occupation (as proportion total employment), 1986–2019 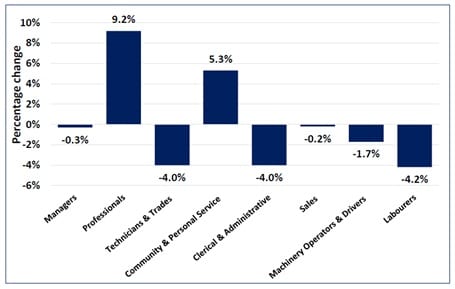 Historical data proves that changes in the occupational composition in the Australian workforce are not new. It is quite evident that structural shift in employment patterns is a constant attribute of the job market in Australia.

Furthermore, previous data presented contradicts the public presumption that due to the advent of digital technology, jobs that use high technical skills are better paid and retained while those without high-level technical skills have lower pay and are less secured. Low-skill jobs are the ones have been less affected by technology. In fact, there has been growth in the employment shares in caring and public services and hospitality. It can be concluded that the assumption that high-skill workers will benefit from computerisation over low-skill workers is unreasonable.

Forecast for in-demand skills in the future

In order to predict the future evolution of employment and what skills are expected from future graduates in Australia, the following perspectives should be taken into consideration.

i. Past Employment Growth as an Indicator of Future Needs

In a survey gathered from ABS Labour Force on total employment growth among the ten highest-job-growth industries over the 5 years ending February 2019, service industries top the list. Most jobs in the service sectors are unaffected by computerisation due to the inability of machines to perform tasks requiring a direct human connection between service providers and users. 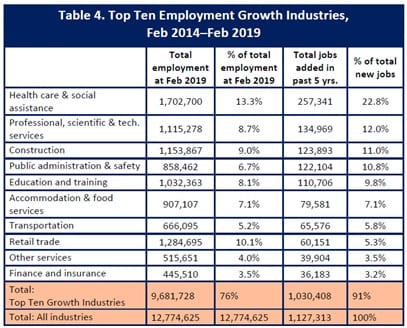 The 250,000 jobs added in the healthcare and social assistance sector over the last five years represent almost a quarter of all new hiring created in Australia. The health sector is the biggest employer in the country.

Three of the top five sectors with the largest employment growth are marked by public provision – healthcare, public administration and education. This shows the increasing demand for public services in Australia.

In summary, sectors for which human interaction is a vital factor to production are projected to have a continuing strong demand for employment. In most instances, roles in these sectors depend on vocational and trades training to develop a future workforce including construction and transportation. On the other hand, some private sectors like hospitality and retail trade experience minimal skills required due to the low-paying nature of the jobs they offer.

The growing demand for employment from the human and caring services sectors will continue. These are the jobs that are insulated from the impact of automation. According to the data gathered by the Department of Employment, Skills, Small and Family Business (2018) employment projections from May 2018 to May 2023, strong growth in employment for both healthcare and education is predicted to continue in the next five years, with healthcare projected to add 250,000 jobs in 2023, mostly in aged and disabled carers, registered nurses, and childcarers; and education projected to add 100,000 jobs, particularly for education aides and primary school teachers.

On the other hand, process-driven administrative and managerial roles are projected to decline in employment until 2023. Such occupations include personal assistants and secretaries, office and program managers, and machine operators. This decline reflects the computerisation in business administration which makes the process cheaper and more efficient.

Another factor to consider in forecasting future skills demand is the current skills shortages reported by businesses.

Based on the data collected by the Department of Employment, Skills, Small and Family Business, employers reported skills shortages in the professional and managerial occupations, and in the technician and trades industries. The mentioned skills shortage peaked in 2007. Before 2012, there were shortages in registered nurses, midwives, psychologists, and physiotherapists. There was a rise in reported shortages for professionals in 2018. Roles include architects, veterinarians and physiotherapists.

Shortages in specific skills, knowledge and abilities were further identified using the OECD’s (2019c) Skills for Jobs database. Complete figures are shown in the table below.

According to the data, there’s a critical shortage of basic skills in Australia. OECD defines basic skills as the capacity that facilitates learning or the rapid acquisition of new knowledge and are categorised into two subskills: process and content.

Process skills include conscious application of learning strategies, critical thinking and monitoring of an individual’s learning process. The job roles that are in shortage of such skills were in the health industries.

Content skills are comprised of reading comprehension, listening, writing, speaking, science and mathematics. Science and engineering professionals were the hardest roles to fill using this skill.

Systems skills are those attributes needed to understand, monitor and improve socio-technical systems, including judgement and decision-making, and systems analysis. Complex problem-solving skills include the capacity to solve new, imprecise, complex real-world problems. Shortages for both skills are seen in the science and engineering sectors.

Social skills are the capacities required to work with other people and achieve positive outcomes, including instructing, social perceptiveness, service orientation, and coordination. There are social skills shortages in health professionals.

In another cluster of data gathered by OECD, there are significant knowledge shortages in education and training, health services, and mathematics and sciences. The increasing demand for health and social services could be a vital factor for such reported shortages. 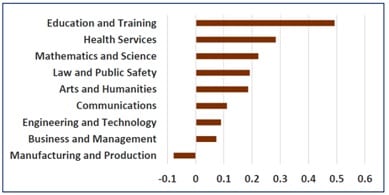 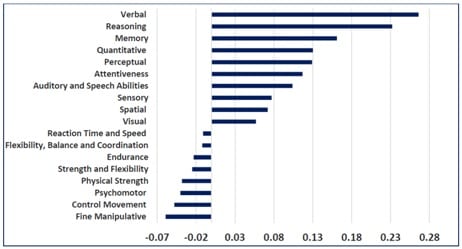 Combining all the shortages figures, it can be concluded that knowledge-type shortages are the most immediate concern for Australia. This brings attention to the important role of universities in assisting acquisition of knowledge in a modern and high-skill job market in Australia.

iv. Ageing of the Workforce

Most of today’s experienced employees began their careers during the earlier phases of their respective industries and are now preparing for their retirement.

Putting together the rapid increase in the employment of public service roles and the ageing of its existing workforce could pose a pressing concern for these industries in the coming years. Other sectors with older existing workforce are transportation, utilities, manufacturing, wholesale trade, and mining. There should be a careful planning for the development of skills to sustain a productive workforce for the mentioned industries in the job market in Australia.